October 28, 1922 – July 28, 2022
Amelia (Emily) Sutherland passed peacefully at Discovery Harbour Care on Thursday, July 28, 2022. Growing up she was a twin and the youngest of 8. – on a large homestead in James River, Alberta. She left home in the late 40’s and headed to Vancouver where she worked at the Turf Hotel, there she met W.H and the two married in 1951. The couple then moved north of Prince George. There, they ran a bunkhouse and Emily would cook and clean for their 16 employees, all while raising their 4 young children who were all only a year apart.
In 1956, the pair moved family to Quesnel and bought 180 acres along the Fraser River. They cleared the land themselves so that they could farm potatoes, veggies, sheep, and thousands of laying chickens, with lots help from children when not in school. When children left home, they chose to sell the farm, travel in their Winnebago to Yuma Arizona and then retired in Kelowna in 1976. They joined the community centres and legion. There, Emily could be found dancing with her beloved Bill, playing softball, volunteering for games, and seniors’ trips, always winning at bingo, and no one could beat her at a game of crib. They often traveled all over BC and Alberta, camping and fishing and visiting family in Calgary.
In 2002, after her husband passed way, she continued volunteering at the community center with bingos and games. She was always very active, energetic, very positive and hard working. She loved to have company and wouldn’t let anyone leave her home unfed, whipping up coffee and sandwiches for guests in no time flat.
Unfortunately, suffering from dementia, in 2018 she moved to Campbell River to be closer to family. Emily will be deeply missed by her son, Glen (Ester) Sutherland or Calgary, AB; her daughters, Linda (Mike) Lazare of Black Creek, BC and Roseann (Wilf) Doerkson of Quesnel, BC; her twelve grandchildren, Cindy, Christine, Stewart Maria, Steven, Tracy, Carey, Eric, Jason, Chad, Sarah and Ryan; her sixteen great grandchildren; her two great great grandchildren; and numerous nieces and nephews. She was predeceased by her parents, John and Emilia Rose; her sisters Elsie, Mary, Pauline, and Mildred; her brothers, Otto and Edwin; her son, Howard in 1995 and her beloved husband Bill in 2002.
The family wishes to extend a very special heartfelt thank you to Discovery Harbour Care Centre and all their staff who took such wonderful care of her and made the last years of their “little Sweetheart’s” life, so very special.
A family gathering will take place in Kelowna at a later date.
Memorial Donations may be made directly to the Canadian Cancer Society or to Alzheimer Society of Canada.
Emily will always be remembered for her big smile, and positive attitude. 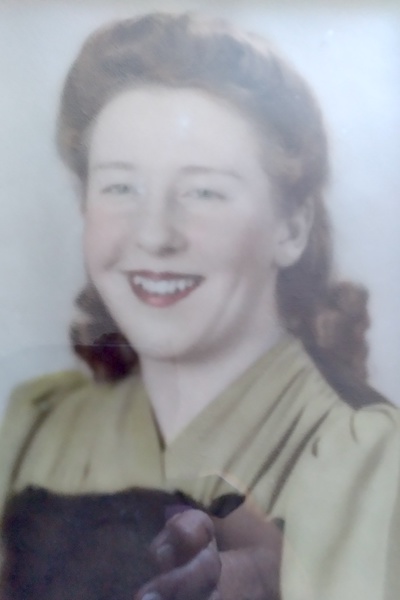