Passenger numbers at the Nanaimo Airport have soared to new heights.

Mike Hooper, YCD’s president and chief executive officer, said it is the first time, to his knowledge, that Nanaimo has exceeded Comox in passenger numbers in single year.

One reason for optimism is because Air Canada Rouge will not only operate seasonal non-stop service from Nanaimo to Toronto’s Pearson International Airport again this summer, but the airline has decided to increase frequency on the route, an Air Canada spokesperson confirmed with the News Bulletin.

The airline will operate five weekly flights to Toronto between Jun. 21 and Sept. 1. It will then switch to four weekly flights beginning Sept. 2. Seasonal service will end Oct. 7. The route will once again be served using a 136-seat Airbus A319.

Hooper said he expected the Toronto route to return this year, explaining it was heavily used last summer.

“Our load factors were greater than 85 per cent in the summer time,” he said. “I was on one trip to Toronto and it was 100 per cent full.”

With non-stop flights to Vancouver, Calgary and Toronto, Hooper said the airport isn’t done trying to attract more flights. He said there is strong demand for service to Edmonton – which was cancelled by WestJet in 2016 – Kelowna, Las Vegas and Mexico, but only so much the airport can do to add new routes.

“We can reach out to the air carriers and suggest where they should go but in the end it is really up to them,” Hooper said. “Airports are all about setting the table with the right runway, instrument landing system and they will come to our table, our airport, when there is enough people there.”

YCD doesn’t have the ability to handle wide-body aircraft and with Vancouver International Airport (YVR) nearby, Hooper doesn’t believe large jets are the best fit for Nanaimo.

“We couldn’t take a Boeing 777 and I don’t see us ever wanting to do that,” he said. “In my mind, I don’t see why because we are so close to Vancouver and some larger airports.”

Hooper said YCD is better off serving destinations in North America, the Caribbean, Mexico and Hawaii.

In an effort to keep pace with growing demand and attract more flights, YCD recently broke ground on a $15-million expansion project that will increase the terminal’s floor space by 60 per cent when construction is completed in 2020.

Hooper said it is all part of a 20-year master plan that encourages the development of a hotel, restaurant and other commercial and aviation related services on airport land. He said there is enough demand for those types of services, adding that he expects a significant development to occur over the next two years.

“On ground side, I think we will see something substantial within the next 24 months,” he said without providing specific details. “We’re still working towards it. We’ve had a whole bunch of requests. It’s not the businesses that we have to attract, they already want to come. We just need to make sure we meet the expectations of our surrounding communities.” 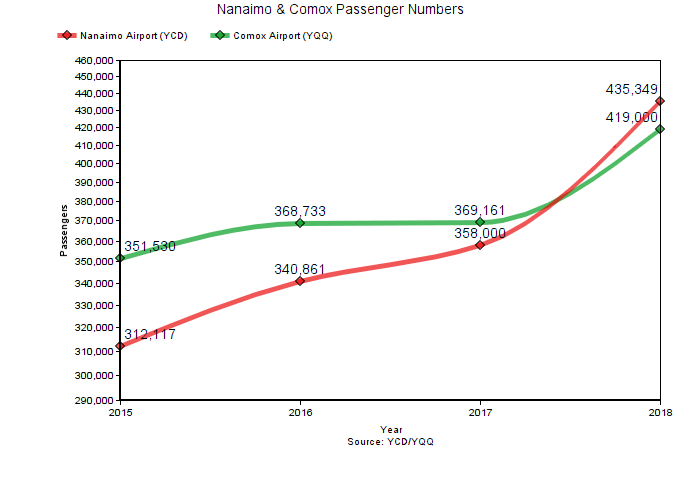